skip to main | skip to sidebar

This caricature was done last week for a friends wife who was filmed for the Channel 4 cult T.V. programme Come Dine With Me. She was picked, so I believe, for her vanity which she readily admits herself, so I was asked to picture her with a drink and a mirror together with her hour-glass figure.

I've no idea if it will get onto the show but it was fun to do! 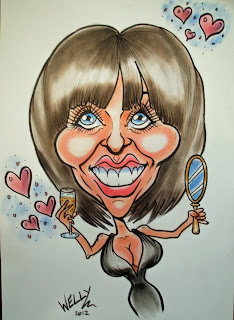 I'm pleased to say that Come Dine With Me have asked for permission to use this caricature in the show to be screened later in February. Watch this space!
The Come Dine With Me episode was aired last week featuring Kathryn Hoskisson who caused controversy by placing a paper bag over one of the "uglier" male contestants. My caricature was shown briefly a few times in the background on the wall and does seem to sum up how she was perceived on the show.
Posted by Welly at 3:39 AM

WELLY'S ART PRINTS FOR SALE! CLICK THE LINK BELOW